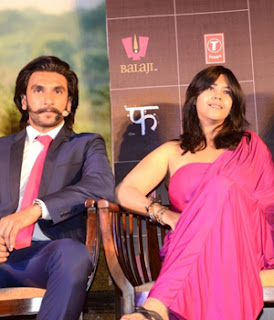 Successful Bollywood producer and TV czarina Ekta Kapoor says that “Lootera” is one of the most special films she has made so far and predicts that it will rock the box-office.

“‘Lootera’ is among the most special films we’ve produced. We’re extremely proud of it. It has great universal appeal and word-of-mouth potential. That’s why we are confident to show it well in advance to people,” Ekta said in a statement.

Directed by Vikramaditya Motwane, the film is a period romance and features Ranveer Singh with Sonakshi Sinha. It releases July 5.

This is reportedly the first love story coming out of Balaji Motion Pictures banner and Ekta is elated with the way it has shaped up.

She wants to show the film to family and close friends. They are currently drawing a list of people who would be invited for these special screenings.
Posted by Arun at 6:30 AM