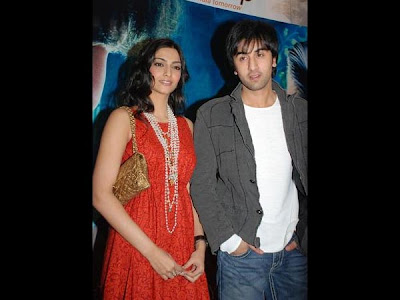 The whole World knows that Ranbir Kapoor and Sonam Kapoor don't share a very cordial relationship. Both Ranbir and Sonam made their debut together with Sanjay Leela Bhansali's Saawariya, but the co-stars did not maintain any relation post the release of their film. Rumour has it that the two met on Arjun Kapoor's birthday party and decided to bury the past and start afresh.

At the party, Sonam and Ranbir met each other very warmly. It is said that Sonam and Ranbir were very close at one time, but things changed when Ranbir started dating Deepika Padukone. Well, nothing is permanent in Bollywood!
Posted by Arun at 8:12 AM